Arcade categories is one of the most popular category on this portal. Arcade games category comes from games machines installed in shopping arcades in 1980s-90s. Most games in this category are point and shoot categories. This is one category which is enjoyed by all age groups. They can be simple easy to pass time games to intriguing games with multiple levels and engrossing games. For example, <a href="http://gamersmoby.com/game/christmas-tree-fun" title="Christmas Tree Fun">“Christmas Tree Fun"</a> is easy to understand simple game where user has cut a tree in limited time. The number of logs one makes in the time is counted. It’s a simple and easy to play game. One always wants to do better the game against its own score. <a href="http://gamersmoby.com/game/airplane-survival" title="Airplane Surviva">“Airplane Survival" </a> is another game in the same genre. But it requires some skill to play this. The objective of the game is to make your airplane dodge the missiles coming from all around. This requires some degree of skill and agility. Also, there are options to switch to better plane as you increase your proficiency and make more points.

Break out from the brick walls

Hop in and out of donuts!

Bounce your way past a changing world

Play as a unicorn, flap through the rainbow sky

Match the correct food within 60 seconds

Control the claw crane to pick up aliens

Hop and bounce without falling

Collect and connect the zombie gems

Hop your away down the mountain

Match the monsters, eat the cake 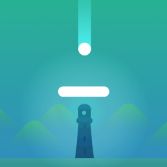 Move the paddle to avoid deadly shurikens; collect white dots to slow down the dark spikes.

Tap to slam the ball down. Keep bouncing as far as you can. Time your jumps to ensure safe landing.

Rebuild the great town of Dumbville

Stop ants and bugs from invading your home

Eat the dots, avoid the monsters

Play as a giant hamster. Run along the city streets.

Build the highest tower in the world